Baton Rouge, LA – The historical Lincoln Theater now has solar power with an off-grid, completely self-contained solar power system to run it’s new air circulation system.  The theater, owned now by the Louisiana Black History Hall of Fame, is undergoing renovations in stages.  Gulf South Solar was selected to design and install a solar power system for the theater.  Now there is fresh air circulating 24/7 at the theater thanks to the Outback Power Systems “Flexpower One” inverter combined with a 24 kilowatt-hour battery bank.  The system is powered and recharged by the sun using SolarWorld solar panels.  The extra power this system has can also be used to run lights and tools during the renovations.  While a permit was obtained for the self-contained solar installation, it may be a while before the theater itself can be brought up to electric code and receive an occupancy permit.  At that time the system may be grid-tied to sell back the excess power and provide backup power for emergency lighting or critical circuits!  Stay tuned for updates to this amazing piece of history now solar powered. 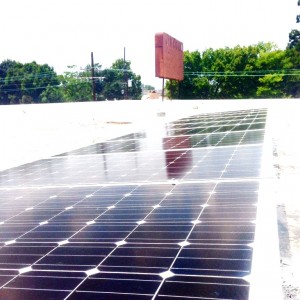