As we prepared to fly down to Haiti in October 2015, we checked our tools and tried to think of every part we could possibly need for our solar power installation. There would be no second chances or supply houses nearby. The last thing to confirm was that our solar power system had made it to Gressier, Haiti, but that was not the case. The three pallets we shipped off early in the summer were not going to make it before our scheduled trip in October that we had already bought tickets for.  Our equipment shipment was postponed due to the Air Force plane being diverted to aid in relief efforts for the flooding in South Carolina.  Without our equipment on site we had to scrap our trip three days before we were to fly down.

Our new plan was to wait until our equipment was confirmed to be in Haiti, which turned out to be a month later. We rescheduled our trip and flights for January 8-13, 2016. This turned out to be a blessing as “winter” in Haiti provides a slightly lower temp to work in with highs at 90 degrees.

With that Friday being a full travel day, our first hike up Bellevue mountain to see Respire Haiti was the next morning. At the top of the mountain Megan walked us passed the school where we originally planned to install the solar on, and then to where the new medical clinic was built.  I met my Haitian helpers (who were eager to learn solar) and climbed up on the roof where the solar panels were going.  It checked out fine as did the equipment room where the inverter and batteries were going.

Our team spent all day Saturday installing the rails on the roof, and the inverter and batteries in the room. Sunday we attended church actually under the roof we were installing solar on!  Monday we continued wiring the array and inverter as well as moved the modules up to the roof. By Tuesday lunch we fired up the inverter on battery power only which brought power to the clinic!  By the end of the afternoon we completed installing the solar panels on the roof and connected to the inverter. Everything worked perfect the first time and we were grateful because our flight to return home was early the next morning.

The system consisted of 30 SolarWorld 265 modules on SnapNrack rails, an Outback Radian 8048 with 2 FM-80 charge controllers, and 16 Trojan L16RE batteries.

This gift of solar power to Megan and the Respire Haiti organization will be one that keeps on giving. I am excited that future medical teams take advantage of electricity in their service to the people of Gressier, Haiti. Maybe next trip we can provide that solar power to the Respire school we had originally intended to help! 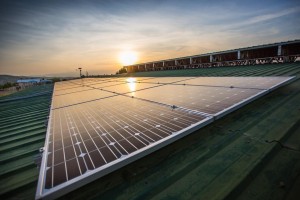