A team located in Buffalo, NY started a project called Solar Car Project.  They built a solar powered car to travel the globe, where the journey began in the Great Lakes area on June 12, 2008.  They travelled West to Oregon and Washington and up to Canada and in the Arctic Circle!

They are the first solar car in the world to operate below freezing temperatures, first to drive on an ice road, first to reach the arctic circle, first solar car to charge with the power of the midnight sun, and are world distance record holders.

This car, along with Gulf South Solar was in Baton Rouge at the Capital on Monday, May 4th.  Many Representatives stopped by to pose for pictures with the car and to discuss some of the 11 solar bills currently introduced by the House and Senate.

The Solar Car’s support vehicle, when in New Orleans last week, was broken into and robbed. Gulf South Solar donated a laptop computer to the Solar Car Project team to help them continue their trek across the globe. To learn learn more about their journey go to: www.xof1.com 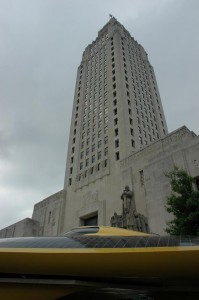 Solar Car at the Capital