The latest home GSS installed for the Make it Right foundation was a particularly challenging installation. After the breach of the industrial canal, the original home was left uninhabitable after the storm and was the only one still standing after the flood waters rushed in. Miraculously, the tree prevented the rushing water from washing away their home. While the residents of 1708 had evacuated before the storm, four of their neighbors were left scrambling for higher ground as the flood waters began to rise. They climbed the tree to escape the rising flood waters and were able to jump to the rooftop of the only nearby home still standing. This oak tree stands today, next to the new, energy efficient home as a daily reminder of the determination and resilience of this community. The tree that means so much to the community also shades much of the rooftop. When the Make It Right Foundation started working on plans for 1708 Tennessee, the residents insisted that this tree be left intact.

The only space on the roof that was not shaded by the tree was a small area towards the front of the home. Gulf South Solar chose to go with the most efficient system available for this small space. In order to maximize the systems output, Gulf South Solar selected SolarWorld 175 watt modules and enphase inverters. When we told our manufacturer about this project, SolarWorld immediately responded by offering to donated all of the modules for this project.

The engineering team at GSS designed a non-penetrating mounting solution to secure the modules to the standing seam metal roof. This system securely attaches to the raised seam of the roof creating a framework that not only allowed the mounting of modules – It also supports the micro inverters. The micro inverters were selected for this project for their superior ability to maximize the power production for each individual module.

The homeowners love their new home and solar power system. Before the storm, their utility bill was running over $400 a month. Now, in their new energy efficient, solar powered home, their bills are about $30 a month. 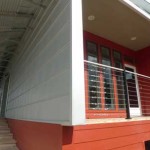