In the last month we’ve had the opportunity to come to the rescue of two separate solar installations that were attempted by “solar installers.”  In both cases the system owners had paid for the work but the installations were not completed.  What makes it worse was that there were numerous code violations that affected the performance, payback, safety, and life of these solar power systems.  There is no telling how many of these exist around the state.

One of these was a residential installation that had been basically abandoned for months with promises of completion “tomorrow.”  The company had attempted a “grid tied, battery backup system” The first thing I noticed was that the inverter panel was missing the majority of the internal wiring as well as all the breakers.  The covers were off and hanging LIVE by their wiring.  The inverter assembly was in bypass mode, meaning the electricity was coming in from the utility and going straight out to the emergency subpanel.  To make things worse the inverters and batteries were installed in the attic!  It should have failed inspection for that reason alone, yet it was passed by the local building and electrical permit office and was net metered by the utility company.

Even from the ground you could tell that the array was visibly skewed.  Once we made the roof inspection, it was determined that the array was unflashed (flashings are what protect the roof penetrations from leaking), ungrounded (exposing the system to lightning strikes and ground faults), and the electrical wiring penetrations through the roof were made improperly.  The wires from the array had no over-current protection until they came inside the home (violation).  A three-pole locking, fused disconnect was mounted in the attic and unnecessarily used as a landing point for two of the six strings.

Two of the 600 VDC (Volts Direct Current) wires were spliced to an improperly rated piece of Romex wire in a junction box since they were apparently cut too short.  The 25’ home run from the attic disconnects were made in metal conduit (not required after overcurrent protection) with very stiff #4 wires (overkill for the amperage and distance).

Wrong Inverters – After all was corrected and completed it was discovered that the wrong inverters were specified and were for “off-grid” use only which means they cannot sell back power.  The factory agreed to allow us to pull them and return for conversion to “grid-tied” models, at an additional cost to the owner.

We were called by the homeowner out of desperation to get the system working and for fear that the system could burn the house down.  By working with these systems for over 10 years it was easy to spot the problems, get the right parts, and get the system in good working order. 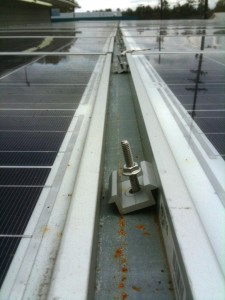 Commercial Problems – We were also called in on a commercial project to inspect an installation which had its own share of problems.  The first thing we noticed was the carport canopy that was used to support the array had no tilt and that water was pooling on the modules.  The modules were being supported from their ends only and were therefore sagging.  One had completely bowed down in the middle several inches and was ruined.  As an afterthought support bars had been added below the midpoints of the modules but, in many cases, did not offer any support.

The wrong hardware was used to attach the modules and therefore had already come loose in many places from swaying or expansion and contraction.  There was no grounding of the modules to the supports and the supports to the combiner boxes.

In a situation like this a traditional PV racking system should have been incorporated with the support structure in order to assure proper attachment for wind load, grounding, and to meet manufacturers’ requirements and not void the 25 year warranty.  Modules typically should be supported at the ¼ and ¾ points.

No Tilt? – The carport structure does not have adequate tilt causing water to pool on the modules.  Since the SolarWorld modules used do not have grounding screw holes then special grounding clips (called weebs) should have been used with them.

The array combiner boxes did not have the proper penetration seals where the wires entered which left the boxes open to wasps, bees, etc. and could be dangerous to technicians servicing them.  Watertight strain relief connectors should have been used to seal the box and support the wires on all openings.

Shorted Array – While running a “string voltage test” on the array it was determined that two of the main wires were shorted out.  This was a result of individual strings either shorted or reversed.  We determined which strings it was and turned their breakers off until the array can be traced for the errors by the electrician.  An alarming thing to find was a ground wire loose in the inverter cabinet that came in contact with the DC positive buss bar during inspection causing arcing which had to be repaired. 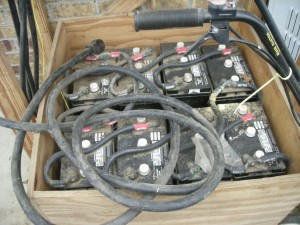 To summarize, solar energy systems (especially those with battery backup) are complex and should not be attempted without full knowledge of their wiring and operation.  Electricians with decades of experience, as well as solar installers that typically install micro-inverter systems need specific training and experience with battery backup systems or they will run into problems like these where they underestimate the job or overestimate their abilities.

Feel free to contact me with your questions or comments.